On Teaching Girls the Art of Giving and Hospitality

Happy Wednesday to you!  Most of the day is gone and I'm just now sitting down to post.  As you know, twice monthly I work with our four oldest granddaughters teaching them sewing(which is interesting since I'm not a seamstress).  I had mentioned the girls were making their moms two presents~the first was a stationary holder that Miss S is holding below.  Inside, I had place two separate sets of custom made greeting cards for my daughters.  One set was of Ireland and the other set was of Kauai.  The other present the girls made was a travel curling iron cover/holder.  The stationary holder was made from a placemat, while the curling iron cover was made from a pattern.  Miss M is on the left holding that; I absolutely loved the fabric(probably because I love Cardinals and wish we had them here). 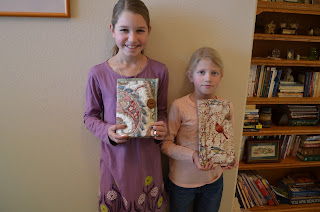 The girls also made their sisters a skirt for their American Girl dolls. 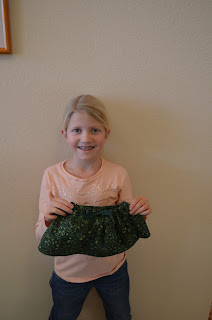 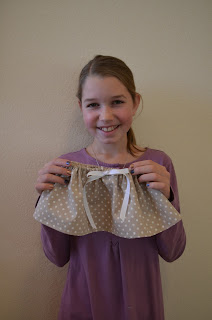 Unfortunately in our haste to get everything done, we wrapped the stationary holder before we took pictures-it was identical to the one Miss S was holding.  Miss O was holding the skirt for her sister's doll. 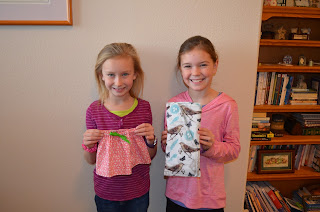 This morning we had our quarterly tea, except that it was a breakfast with all sorts of yummy foods. 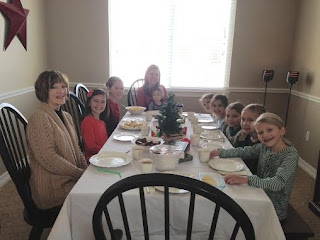 The theme was Little Women and after we had eaten, some questions were asked by Carrie about the story.  Typically, the girls do a craft and also have some sort of special treat or goodie~but this time Carrie decided to follow suit of a story line in the book and give to others who were needy.  The older girls understood the significance of the lesson and the money that would have been spent on a craft and goodies was donated to Compassion International to help a Mom with a Baby.  I was so touched by this gesture! 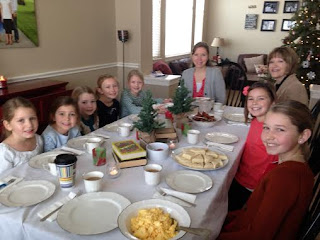 Last night our two oldest grandsons came to spend the night, it is always such fun!  This morning while I went to the dentist before the tea party, they had a nice big breakfast and played Yatzee with Papa.  Kim dropped on Little Man on her away to the party so he could have some boy time.
What a wonderful morning!  This afternoon hubby and I began to take down the Christmas decorations; we got one room completely back together and will work on the rest of it tomorrow.
We don't have any major plans for tomorrow night, except for going out to an early dinner at one of our favorite restaurants.  We will be home before six and probably just watch movies.
I hope your last two days of the year are smooth and that you enter the New Year with joy and happiness.
Until tomorrow,
Noreen
Posted by NanaNor's at 2:46 PM