Hello Friends, Today I am celebrating living life to the fullest and turning a year older, hopefully wiser. I was blessed with friends taking me to lunch this week and sharing love with me in the way of special gifts. One friend gave me a journal and book, my neighbors gave me a gift card to my favorite nursery and then my dearest quilting/traveling friend Barbara made me this wonderful quilt tool caddy.. I love everything about it, especially the thoughtfulness and love that went into making it.  Thank you Barb! 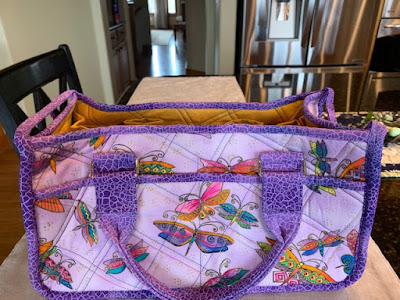 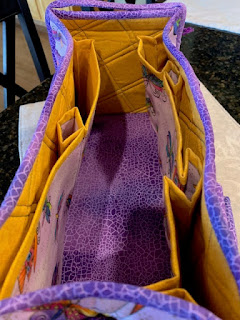 Today I will be running to the library to get books on The Tetons and Yellowstone for our trip in the fall.  I will also being hanging out downstairs sewing, since it hasn't worked out this week.  Another dear friend will be taking me to the movies around Easter to see the Krissy Metts movie; when she asked what I wanted this was my answer.
I'm looking forward to more adventures this year and lots of fun times.
Joy To You,
Noreen

Happy Tuesday to you.  I can't believe it's been since last Thursday that I've gotten on here, but you know how life it-busy.  The weekend was good, one granddaughter had her 9th birthday celebration; it was so fun.  Each grand gets to choose the party theme and this party was Llama's.  She loves these animals and it showed.  For dinner they broke out the antelope ground meat and mixed it with beef and made meatballs.  Oh my, were they delicious!  There were just 16 of us as Mr. B had to stay home with the puppies; he did get dinner though. 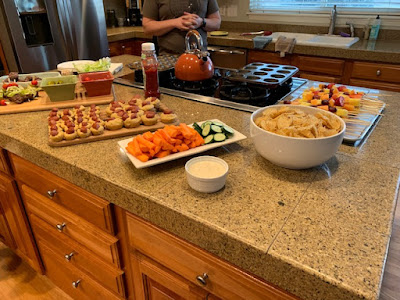 Here is the birthday girl on the left-she is so shy, but oh so adorable.  Her youngest cousin is right next to her. 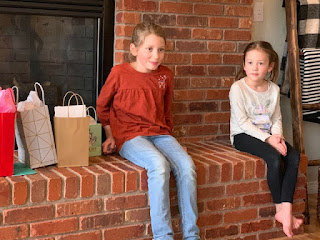 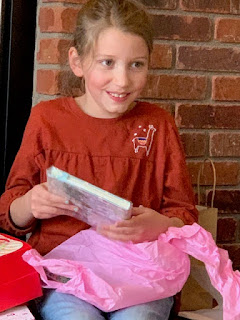 Her daddy Eric is the most creative baker I know and he made these Llama cookies to go with ice cream.  They were Paleo cookies and quite good; there are so many allergies in the family that we often have Paleo recipes. 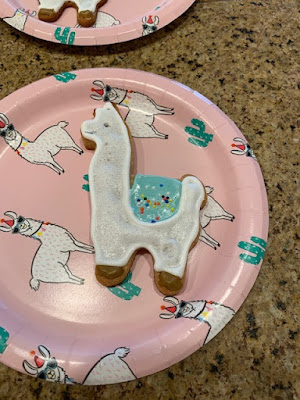 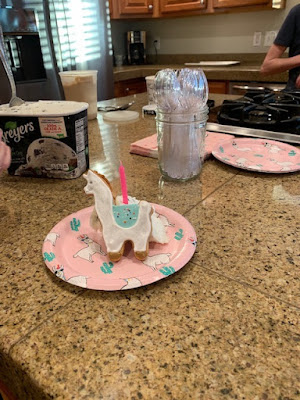 On Sunday I got to puppy sit again and it was so fun. The puppies are opening their eyes and getting very active. If one is being held and the others are sleeping, the pup just wants to be with its pack.
So far five have sold with three left; it will be interesting to watch the last three picked.  Needless to say, these puppies are being well cared for and socialized.  Love it.
I'm celebrating my birthday on Friday and several gals are taking me to lunch, both tomorrow and Thursday.  Hubby and I will go to our favorite restaurant on Friday; then my girls and granddaughters are taking me to lunch on Saturday.  Life can't get any better than this.
Oh yes and one exciting trip has come to fruition-our traveling buddies,  hubby & I are meeting at the Grand Tetons in Sept. for three days and then spending more time at Yellowstone.  We figure this is one of those once in a lifetime trips; so now that we have lodging, we've got to research all the activities we want to do.
Hope the rest of your week is good.
Blessings~
Noreen
Posted by NanaNor's at 4:10 PM No comments: 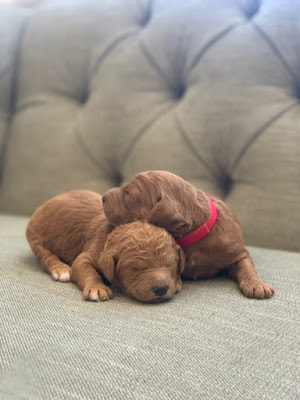 I don't think there is anything more precious than puppies; I'm also one of the crazy dog people that love the smell of puppy breath.  One puppy is already sold and one will be chosen today to go to it's forever home; many inquiries are happening daily, so I imagine that within the next several weeks all will be spoken for.  They make my heart sing.

Joy to you.
Noreen

Smile, You're on Candid Camera

Happy Tuesday to you.  As you know, I'm trying to get over every couple of days to hold the puppies; this weekend I got over both days.  So the top photo is our Lily, who really needed Nana's attention.
She understands she can't get too close to the Whelping Box, but will get close enough to watch the activities. 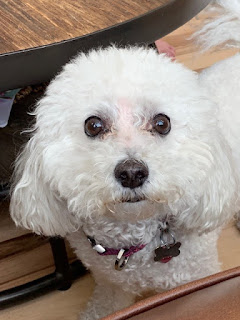 You can see the Whelping Box to the left, this is one of Lily's favorite spots to go to. 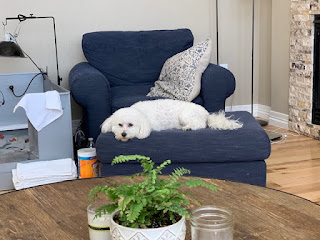 Because I was holding the pups continually I didn't get many photos, but hope to today or tomorrow. I can't believe how much they've grown in just one week. 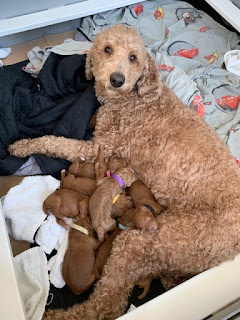 Copper is to the point where she'll get up to go to the door and watch for her family to come back. She is doing such a good job.  It's always so fun to see the pups grow, open their eyes and start to walk-which should be in about two weeks.  I can't wait to see their personalities; on Sunday one was dreaming and even started a low growl-which seemed hysterical to me.
Hope you have a joy filled day!
Blessings,
Noreen
Posted by NanaNor's at 9:35 AM 1 comment:

This is a post from the last several years and I always want to honor my heritage; you may have read it before, if not I hope you enjoy.
It is one of my favorite days of the year~to celebrate my heritage and the heritage of my family. I always love thinking back to my parents and how they celebrated this day. When they were raised in San Francisco, the Irish were looked down upon as many different ethnic groups are. I grew up attending a private school and many made fun of my heritage. WE always wore and still do wear green and celebrate all things Irish.  Here is my story of growing up in a Irish-American family. 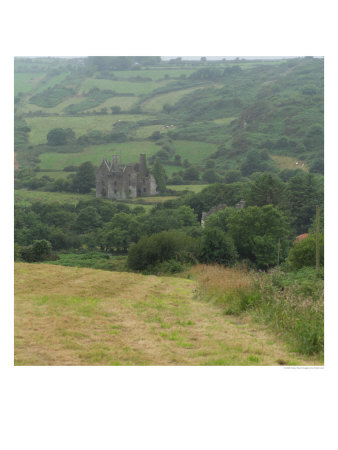 My maternal grandparents were both from Ireland, as were my paternal grandparents.
As far back as I can remember being Irish was of the highest importance to my parents; especially my mother. This was also passed down to my brother and myself; a rich pride in everything Irish. My mother's father  was born in County Kerry and her mother was born in County Longford.
From what we know they immigrated to the United States while in their 20's, their families probably looking for a rich new land after having gone through the results of the potato famine. The details are sketchy and much is unknown, including how they came to know one another. I will say though that most immigrants were a tight knit group of people and being that they settled in San Francisco, I can only assume this is where they met. My mother had a brother and a sister and lived most of her life in San Francisco, until heading to Palo Alto with my father and our family. I never met my grandparents and from my recollections my grandfather died when she was in her teens and her mother was an invalid. Mom took care of my grandmother, who died a year after her father and also cared for her brother and sister. Mom often said her mother had an unusual sense of humor which I believe she passed on to my Mom, as well as to my brother.
My fondest memories of my Mom were of her trying to teach me how to do a "jig". Often Mom would slip into a brogue and when I was in college while visiting Canada, many thought I was from Boston due to my pronunciation of certain words...which I felt came from Mom. An interesting side note~many years ago when we went on a cruise to Alaska, a gal who worked on the ship was from Scotland and she pronouced many words the same way I do, as well as some granddaughters. I smiled a big smile when I heard her!  Many of the stories I grew up hearing and believing revolved around Leprechauns and Banshees as well as "plates dancing on the walls, due to the little people". My brother and I often laugh about this now wondering if it was the Irish Whiskey that influenced what my grandparents saw. Every year on St.Patty's Day Mom would put on green clothing, green plastic shamrock earrings and wear a Kelly green plastic hat. My dad always sent her green carnations, for this was how they celebrated the day. Of course, we always ate Corned Beef and Cabbage although I think this is more of an Irish-American dish.
My brother has so many of my parents traits, a wonderful sense of humor, an incredible work ethic and deep loyalty to family and friends. I like to think I carry some of their traits as well~a bit of moxie, a tad bit of stubbornness(!!!)and of course deep loyalty to family and friends. I never knew mom as an adult, but I know her "Irish eyes are smiling" down at me.
Our daughters grew up celebrating St.Patrick's Day; I would often sprinkle gold glitter on their bedroom dressers and play other small pranks, telling them that the Leprechauns had visited our home.   All of our grands have been raised knowing this side of their heritage and the importance of wearing green on St. Patrick's Day.  Our youngest daughter has also named all of their children with strong Irish names; something I know my parents would be very pleased with; of course, they would also be so proud of all of the grands and the ways our girls and their hubby's have raised them. I love the decision to pick names based on their meanings; Carrie's children's names also have deep meanings.
Over the years, my brother and sister of my heart, have given me pieces from their trips to Ireland and I love displaying them.  Like most from families that are only second generation American, I carry on the traditions that I was raised with and hope that my daughters and grands also value the ties to our past.
So dear ones, this is my prayer for you tomorrow~
May the Irish hills caress you,
May her lake and rivers bless you,
May the luck of the Irish enfold you
May the blessing of St. Patrick behold you!