Happy Tuesday to you all. I hope you've had a good day, mine has been very nice. A friend and I met another friend for lunch today out in Milliken at a place called The Back Sheep Eatery. It is a cute place on Main Street with lots of sandwiches, bagels, salads and treats. They had a wide variety of gluten free items-which always makes it nice for me. They also had some cute gifts-earrings, soaps, t-shirts etc.    Before lunch, I mistakenly went to our friend's home~she had driven to the Eatery, but we saw this glorious Weeping Willow tree covered in Hoar Frost. 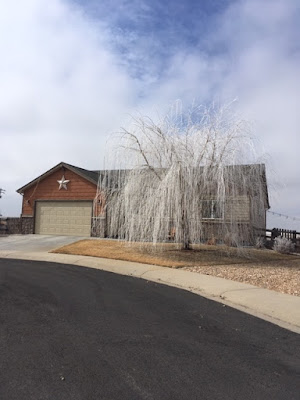 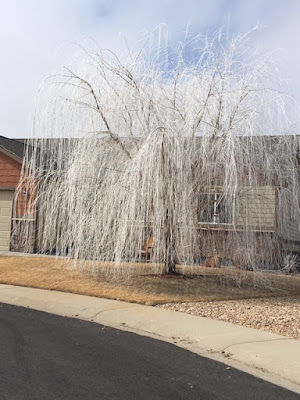 I always love the look of trees covered in frost and this was beautiful.  I am so thankful that we haven't had an abundance of snow, just cold frosty weather.
I hope you have a great evening!
Joy to you.
Noreen
Posted by NanaNor's at 3:24 PM 4 comments:

Happy Sunday to you! On Friday the girls all gathered at Kim's for a Jane Austin afternoon; Logan hung out too and is used to spending time with girls. Here are three cuties cuddled up in a quilt my brother gave them; it was all his marathon running shirts-such a treasure. 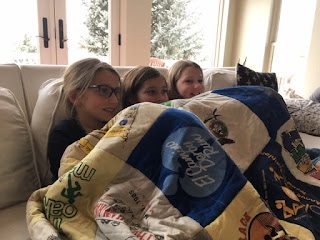 We tea and an assortment of goodies-cheese, crackers, trifles, berries etc.  Here the two youngest ones watching Pride and Prejudice.  This happens to be in their families favorite top five movies. 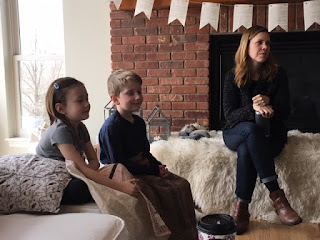 Of course Banning was happy to see me; Petrol was sitting on the couch beside me.  Hunter was definitely jealous that he wasn't there. 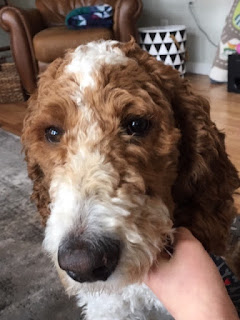 Today I have Copper and Lily coming over for the afternoon.  Copper is getting quite big and should whelp in about two weeks; it will be fun to be there for it.
Hope you are having a great weekend.
Hugs,
Noreen

Happy Wednesday to you all. We have blue skies today and no snow, but my it is beautiful and cold outside. Here is our view of the trees covered with Hoar Frost. I love the sight. 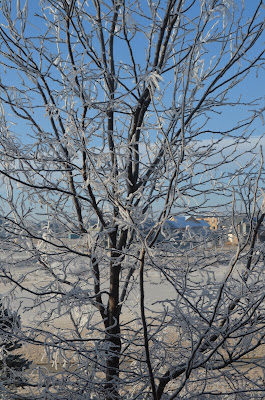 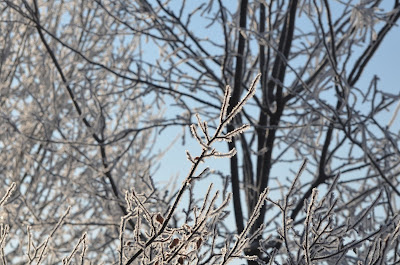 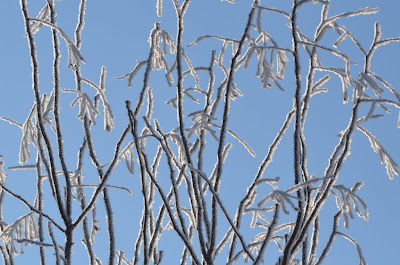 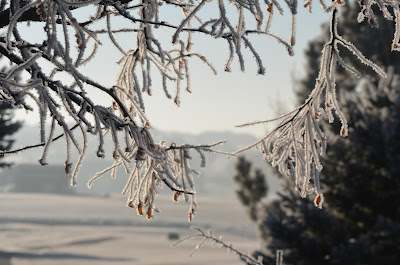 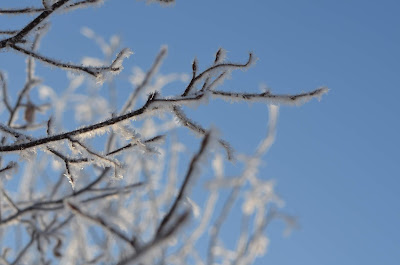 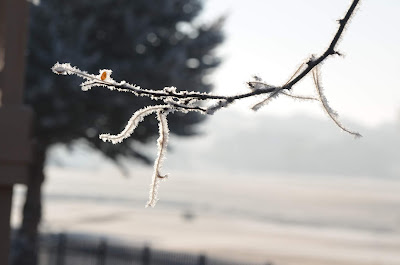 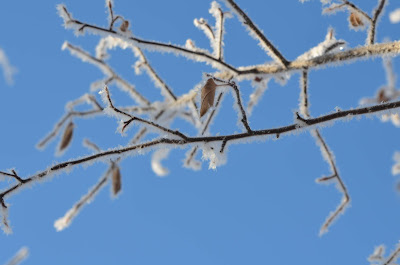 Today is supposed to be warmer than this past week and the only day where it will be tolerable.
We are off to the gym and then I'm meeting friends for coffee this afternoon.  We have gone to several movies lately, two of which I wouldn't see again.  The latest one we saw was The Upside with Nicole Kidman.  We both thought it was a great movie and the acting well done.
I'm hoping to see The Green Book this weekend; apparently it is one of the best movies out this year.
I hope you are all doing well and staying warm.  I think the only place in the States that is warm is Florida.  Our Rockies have spring training in AZ and normally it would be pleasant, but it has rained a lot and been so cold.  Glad I didn't spend the money to head down there.
Joy to you!
Noreen
Posted by NanaNor's at 9:12 AM 3 comments:

HAPPY VALENTINE'S DAY to you! Last year I invited our two daughters and eight granddaughters over for lunch while grandpa took the three boys out to lunch. It was so fun and I decided to do it again; this year we all decided that it was a tradition. First off, let me share the beautiful roses hubby bought me yesterday. You can also see lots of cards and several boxes of candy. My girlfriends and I all had the same idea-chocolate. While at See's(my all time favorite candy)I got hubby a box of Truffles. They will be a nice dessert for tonight's dinner. 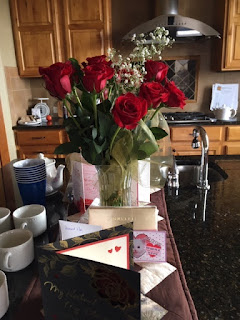 The dining room all decked out and ready for the girls. 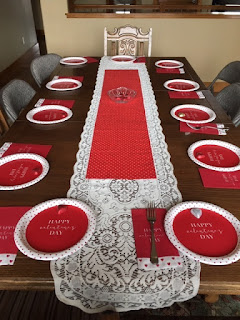 Kim brought a wonderful roasted butternut squash salad, I provided broccoli salad and Carrie brought a rustic bread.  Each of the girls picked one of their cousins names and made a special lunch for her. 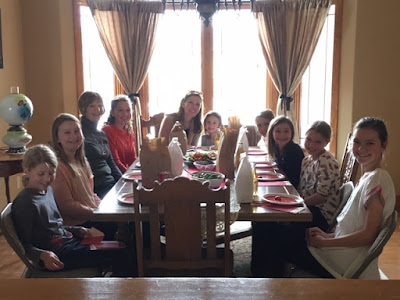 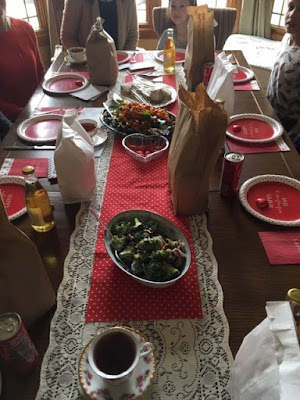 The other end of the table.  Love our times together. 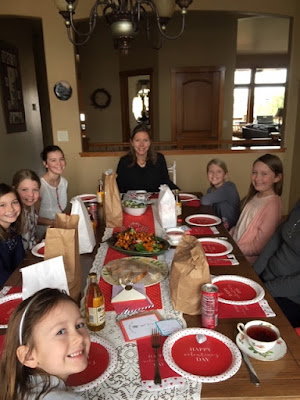 I also provided two Zest cakes from Whole Foods for all of us to enjoy.  Grandpa took the boys to Chic-Fil-A.
So many wonderful memories!  Thank you girls for bringing such love to our lives, thank you boys for making us laugh.
Joy to you!
Noreen
Posted by NanaNor's at 4:19 PM 7 comments:

Happy Monday to you!  As a #ChewyInfluencer, each month Hunter is spoiled.  Somehow my photos on my phone got deleted before I uploaded them~which is what happens when you run out of iCloud Storage.   Ugh.  Hunter Loves this bone and I'm so glad.  I try to keep bones on hand for him to help keep his teeth clean.  We love Ziwi products and he has their kibble daily. 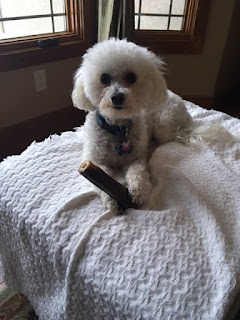 Reward your dog with farm to bowl nutrition with Ziwi Peak Oral Health Deer Shank Bone Dog Chew. Simple and pure, just like the Ziwi love for dogs, this chew gives your pal the best of New Zealand. Using shank bone, which is full of nutrients and marrow, it’s wrapped with a beef esophagus over the top for added flavor. The bone is then naturally air dried to retains its nutrients in a shelf-stable form that is long-lasting and palatable. And for your peace of mind, all Ziwi shank bones are sourced from New Zealand deer, which are raised on traceable, grass-fed and open range farms.
Key Benefits
Precautions
Please provide plenty of fresh water when giving any chew or treat. Because this is a natural treat, its sizing, color and appearance may vary—this is normal. You may also notice a natural scent and oil while your pal chews; this natural oil may stain your furniture, carpeting or other surfaces. To prevent injury and choking hazard, please watch your pet while they enjoy this treat and be sure to choose the appropriate size chew. If this product splinters or develops sharp edges, throw it away immediately for your pet’s safety.
As always we are so pleased with this month's treat!  Chewy is remarkable in its customer service and speedy delivery.  You can find this bone and other goodies here:
chewy.com
As an #ChewyInfluencer, we received this product free of charge.  No review, positive or negative was required.
Thank you Kristen and Natalie for such an incredible program.
Noreen and Hunter

Happy Wednesday to you. Well, our loved ones in northern California didn't want us to miss all the fun, so they send us a storm today. This is the temp around eight this morning. 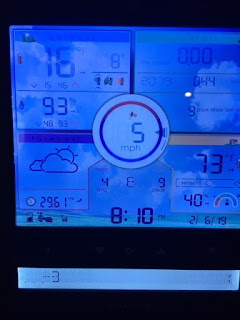 Around ten we looked outside to see this~it is coming down in big flakes and pretty heavy.  Thankfully, it's very dry so I already swept the stairs for Hunter. 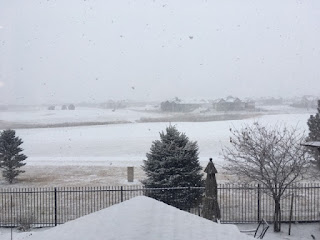 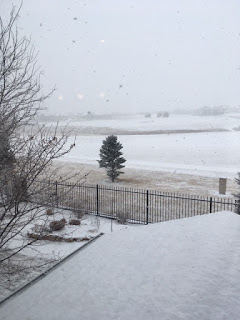 This afternoon we are supposed to get about 4" more, yikes; we do need the moisture though.
Here is a very touching story about an organization that stepped into help; please read it even if you have a different opinion of Cick-fil-A.

Remember last week when the ice storm hit the south? The mainstream media showed footage of miles of cars stranded on the frozen interstates. Several national news broadcasts that I saw reported about school kids trapped on busses for almost 24 hours because of all of the ice and parents going frantic wondering where their kids were. In all of the icy gloom and doom, I bet you didn’t hear about the heroic and generous actions of a Chick-fil-A along Highway 280 in Birmingham, Alabama, did you? Mark Meadows, owner of the Chick-fil-A closed early the day of the storm and sent all of his employees home. However, the employees and Meadows soon discovered that they were not going to be able to get home with all of the stranded motorists stuck on the roads. Some of the cars near the restaurant had been stranded for up to 7 hours. Meadows and his employees fired up the kitchen and began preparing chicken sandwiches as fast as they could. They prepared several hundred sandwiches and then Meadows and his staff headed out and began distributing the hot meals to the stranded motorists on both sides of Highway 280. Some of the drivers tried to pay them for the sandwiches, but Meadows and his employees refused to take a single penny. Audrey Pitt, manager of the Chick-fil-A, explained why: “This company is based on taking care of people and loving people before you’re worried about money or profit. We were just trying to follow the model that we’ve all worked under for so long and the model that we’ve come to love. There was really nothing else we could have done but try to help people any way we could.” However, Meadows and Pitt were not through with their Good Samaritan efforts. They helped push cars off the roads, up inclines and whatever else they could do to help. Then they kept the restaurant open overnight so that stranded motorists could have a warm place to be. A number of motorists slept in booths or on the benches. Then in the morning, they again fired up the kitchen and prepared chicken biscuits for their overnight guests and once again they refused to accept any payment. During that 24-hour period, this Chick-fil-A restaurant opened their kitchen, their doors and their hearts to hundreds of stranded motorists and they did so refusing to accept any payment.

All I can say is well done to the entire group of employees who set out to help those in need, without any cost for the food and sacrificing their time to serve.
Blessings,
Noreen
Posted by NanaNor's at 10:53 AM 2 comments: 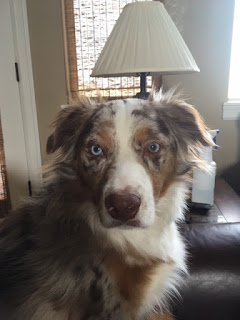 Happy February to you!  It's a month of love and sweetness, so when my Co.Bff texted and asked if I could go play with this beautiful guy over the next month, how could I resist.  Riley is almost two and such a sweet pup.  Kam is in North Carolina with her daughter and first grandson; she's missing her pup like crazy and he is lonely since Kam's hubby went back to work after the furlough.  Riley has quite the imposing bark and I certainly wouldn't want to try to get into their home with him guarding it.  However, he knows me and went nuts when he saw it was me.  I can tell you honestly that I don't think we could ever have a dog that sheds again.  I went over and played with him, took him outside and just pet him a lot.  Kam's other daughter will be there this afternoon to spend time with him.  I can tell he's missing Hunter and our walks and Hunter certainly misses him~as shown me when I got home and he caught Riley's scent.  Our weekend was so nice and pleasant, but our temps are dropping and we should have snow tomorrow.  We went to a Super Bowl party at our neighbors and had a great time-such great food, even if the game wasn't great.
I hope you have a wonderful day and week.  Seems to be harder and harder to find this to post about, so it might be sparse here.
Joy to you.
Noreen
Posted by NanaNor's at 12:51 PM 2 comments: 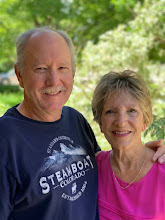 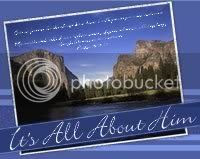