Hello! I've shared just how much joy our pup Hunter brings to our lives and how adored(aka spoiled)he is. I noticed almost two years ago he started having tear staining-not just brown, but red. I talked to our vet and asked about a product that breeders use, but vets try to steer clear of it. It is an antibiotic used on large animals and they don't want dogs to become immune to it. So this January when we had his eight teeth extracted, I noticed he wasn't having any tear staining. Interesting~at first I wondered if it was because we changed his kibble back to what he originally ate or was the infection causing the red tear staining. Then just now I realized that he was also on an different antibiotic for two weeks after his surgery. Here is a photo after his surgery; here it's not even as bad as it had gotten. 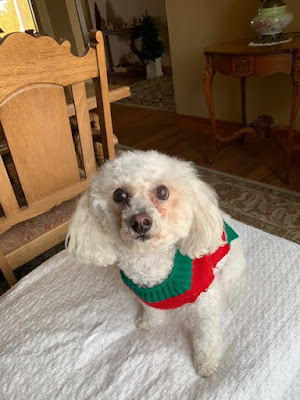 Here is a photo I took today. Amazing how different his eyes look. 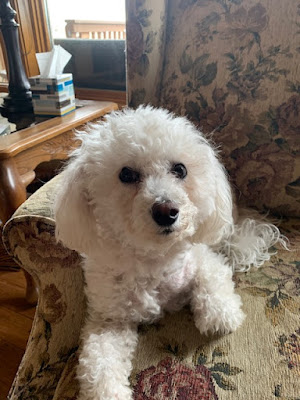 I'm not sure what changed or if it was a combination of things, but I think he looks so much younger than he did before. Don't want him to have to have more teeth taken out, but I do love seeing him look like he used to.  He looks pretty scruffy here due to waiting 9 weeks for grooming.  I will say that since he had his bad teeth removed, he eats more like a dog-meaning that he has kibble in the morning and then a mixture at night.  All I know is that he doing so well; I just wish I had realized he was in pain before.
Hugs,
Noreen
Posted by NanaNor's at 12:38 PM 3 comments:

The Call of the Wild 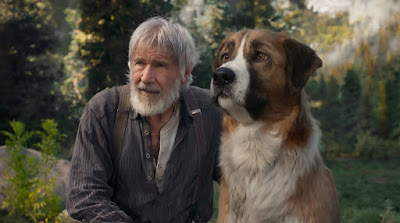 Happy Monday to you!  Yesterday was a cold and dreary day, so hubby and I decided to go to the movies.  We usually go on Tuesday's during the winter, but haven't seen any lately that drew us in-until yesterday.  You all know what a dog lover I am, so this was a must see.  I believe my girls and I read this book decades ago, but I really didn't remember the story.  It was such a good movie, despite Buck being animated as well as the other sled dogs and Timber Wolves.  It didn't hurt that the setting was Alaska-a state hubby and I love.  I will be honest, the only thing that kept me from crying was that they weren't real dogs.  A good friend went with her hubby to a later showing and she did cry.  The robotic/animation has gotten so good that at times it was hard to remember the dogs weren't real-especially when they were about to be mistreated. I'm sure if I go back and reread the story now, the movie may disappoint-but it was good just the same.
So if you are looking for a good flick on some cold day, go see this one.  Harrison Ford is fantastic and never disappoints.
Tomorrow hubby and I are heading down to Boulder to meet a friend that I haven't seen in 28 years.  We both left Silicon Valley at the same time; we headed to Sonoma County and they headed back to Indiana.  She was such a pivotal woman/mentor in my life when I was a young mom; I can't wait to meet her for lunch and catch up.
Hope you are all having a great day!
Hugs,
Noreen
Posted by NanaNor's at 1:45 PM 3 comments: 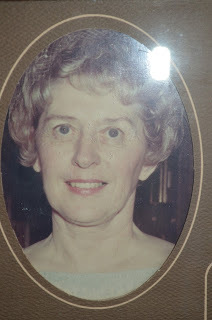 Happy Saturday friends! Today I am remembering my mother~it is her birthday and one of those dates that always sticks with me. She's been gone for 45 years, but I always remember that she thought it was so special to celebrate her birthday on George Washington's birthday. I miss her and miss her knowing me as an adult, wife, mother and grandmother.
May your day be filled with sweet memories.
Noreen
Posted by NanaNor's at 10:16 AM 1 comment:

On A Cold, Snowy Day

Hello again, I thought I was on a roll and back to blogging on a regular basis, but it just hasn't happened. Not quite sure why, but I do try to think of things to post. Today it has been so cold and snowing all day-lightly, like we are in a snow globe. So after hitting the gym late this morning and having lunch, what's a girl to do but head downstairs to sew. I didn't sew, but started the fusible appliqué for my March Patch-Abilities club. 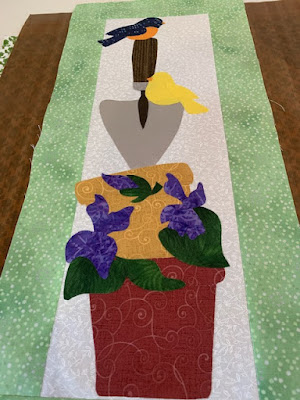 It is a long way from being finished, but I just so enjoy the appliqué that  I find myself working on it ahead of the class.  I will have to stitch some vines for the Violets and some feathers for the wings on the yellow bird, before I head to the class in March and sew it all down.
Tonight hubby and I are joining some neighbors to go to dinner and then afterwards there is a brewery that hosts a fun evening-if you bring in old records you save $1.00 on a beer.  Now the couple we are going with are close friends and neighbors; she and I don't drink, but the guys will save a dollar or two.  Tonight's genre is Black singers or groups; we are taking a  Diana Ross and Marvin Gay album and also a Diana Ross & the Supreme's.  It should be fun to see if they have a good turnout and what music they have.  I have an old Billy Holiday album, but wanted something more upbeat.  The rest of the week is pretty relaxed; I'm sure we have more snow in the forecast. We've had more this winter than we have in the last 12 years.  The only good thing is that all the moisture will help the grass and trees and ward off any grass mites that eat the roots.  I didn't know that was an issue until the last couple of years when neighbors began to tell us to water our grass even in the winter.
I hope your week has started out well.
Hugs,
Noreen
Posted by NanaNor's at 3:55 PM 2 comments:

Coffee With A Cardinal 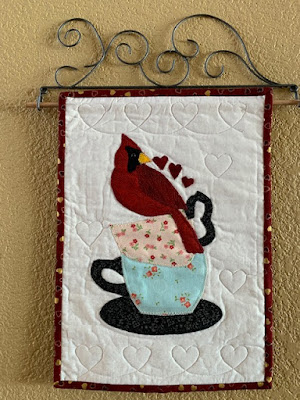 Happy Valentine's Day to you all!  I can't believe it's Thursday and I haven't sat down here until now.  I seem to run in so many directions and other projects keep me busy.  Last Saturday I went to my monthly Patch Abilities club and this was our project.  I've never done much with machine appliqué or hand appliqué for that matter; this project was only my fourth in my many, many years of quilting.  However, I can honestly say that I love this club and the projects.  My goal is to become better at doing them.  I also love Cardinals and wish we had them here in northern Colorado.  Next month's project is just as darling and I am running today to a store for one more item I need for it, then I'll start the different steps.
Tomorrow will be a busy day for me~our mini group is having our meeting at a local store; our year's goal is to support small quilt stores, so we'll have our meeting and then shop.  After it's over, I head home and host our daughters and granddaughters for lunch.  Each granddaughter brings a complete lunch for a cousin and the girls and I each provide something for our lunch.  I'm supplying a Spinach and Mushroom Frittata, Kim will bring a salad and Carrie will supply a dessert.  Hubby and I will be staying in for dinner and have a lovely relaxing evening.
I pray your day will be filled with love and joy!
Blessings,
Noreen
Posted by NanaNor's at 12:45 PM 2 comments:

Happy Wednesday to you. On Monday, I took a class on reverse appliqué offered by our local county Quilt Guild. It was very interesting and I am not sure I'll pursue it, however we came away with a pot holder and pattern. The first photo is of the teacher's pot holder; we both had very similar fabrics-Island Batiks. 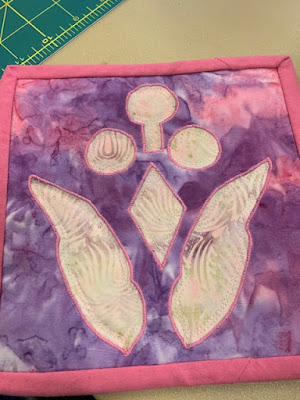 What I enjoyed about the class was that she was a very good teacher and came around to us individually to see how we were doing.  I took my old machine and it was so difficult  to get the satin stitch even and nice looking.  Here are some pieces of her collection; she's been featured in several quilt magazines. 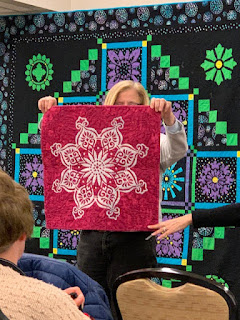 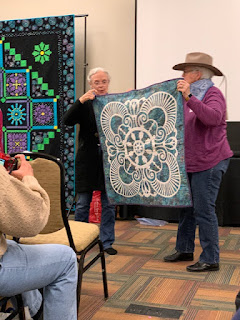 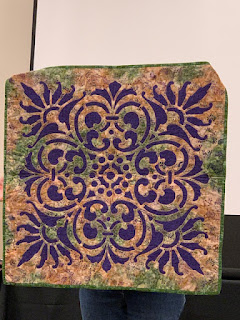 Love this one.  I've got so many other projects to work on and I'm heading downstairs now. 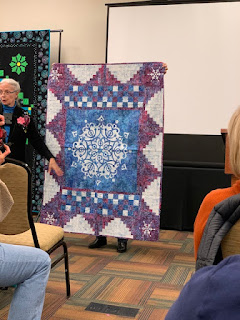 I have stayed close to home yesterday as I wasn't feeling well; I hope I'm on the downhill side of this.  It is not the flu, but took me out for the day yesterday.
Hope you are having a great week.
Hugs,
Noreen
Posted by NanaNor's at 1:24 PM 2 comments: