Thankful for the little things 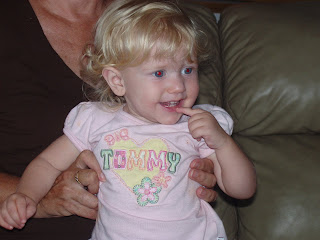 
Today was a big day for our "little peanut"~her parents and two sisters, grandpa and I trekked down to Denver's Children's Hospital for an evaluation of some conditions she's had since birth. Going to the doctors is quite traumatic for our little one due to the fact that she has had regular visits her entire 18 mos. Today was a turning point in her health, hopefully, that will help everyone to know the extent of what's really going on in her little body. Seeing the specialist wasn't as bad as it could have been but after that she had to go to the main children's hospital for an Upper GI and blood work. This is just the beginning for her and within the next month she will be admitted to the hospital for a gastro scope and other tests. Having said all of this, I will add that her parents were troopers and very strong. This nana had such a difficult time, sometimes I wish I could carry the burdens my grand kids face and allow them to be healthy.
I love them each so much and when they hurt I hurt. Now, I will tell you that the blessing in this was while waiting at the hospital for Mackenzie to undergo tests I saw children with cancer, oxygen tubes, other life threatening illnesses who may not make it much longer. I felt such compassion for these families and also realized what Mackenzie faces could be much worse. I am not thankful that any children have to suffer but I am so thankful that we have the technology that might make my "peanut's" life better.
Posted by NanaNor's at 6:52 PM